On May 14, after nine months of deliberation, the Pennsylvania Supreme Court ruled that there was insufficient evidence to show unconstitutionality in the redistricting maps drawn by Legislative Reapportionment Commission (LRC).

After consideration of the specific challenges forwarded by appellants, and the LRC’s response, we now hold that the LRC’s 2012 Final Plan is not contrary to law, and the appeals are dismissed. This means that the LRC maps are now law and will be used in the 2014 elections for State Senator and State Representative. (Majority Opinion,  page 7)
Moreover, we hold that the appellants have not demonstrated that the 2012 Final Plan is contrary to law. (page 59)

It is undeniably disappointing that the Pennsylvania Supreme Court failed to rule the LRC’s Final Plan unconstitutional. The evidence seemed to reveal clear constitutional violations. But the decision is full of small victories for our constitution and for limits on the powers of the commission.

1. Any Final Plan by the LRC should not be assumed constitutional

2. Alternate plans have a place in any meaningful appeal by citizens.

Preliminarily, we note that the LRC asks this Court to reconsider a central premise of Holt I, i.e., our holding that the scope of review in redistricting appeals properly includes alternate plans submitted by the challengers, including plans created by private citizens. LRC Brief at 20-22. (page 35)

The opinion continues to elaborate the point:

With respect to our specific holding that challengers to a final plan may proffer alternate plans in an attempt to discharge their burden of proof, five Justices were in agreement …. In explaining this holding, we noted, inter alia, that “legal challenges in general, and appellate challenges in particular, commonly involve an offering of alternatives. It is not effective advocacy to simply declare that a trial judge’s ruling was erroneous; the good advocate addresses what the judge should have done instead.” 38 A.3d at 730-31. We also credited, at least in part, the Holt I appellants’ argument that the LRC’s position was tantamount to saying that a Final Plan was unreviewable…” (page 36)

3. Any Final Plan by the LRC should not be given special consideration over alternate plans.

We also reject, as we did in Holt I, the LRC’s argument that its Final Plan should be automatically afforded special deference over challengers’ plans, based on the “constitutional commission system,” or the “practical difficulty” of assessing alternatives created by private citizens. LRC Brief at 21. (page 38)

4. Section 16 trumps the political factors of Section 17; they are not on equal footing (contrary to what the LRC said).

In short, Section 17, unlike Section 16, does not speak in absolute terms, much less in absolutes that dilute the substantive constraints in Section 16. . . . . In short, the requirements in Section 16 necessarily trump mere political factors that might color or corrupt the constitutional reapportionment process. (page 41 and 45)

5. Factors not among constitutional considerations are the protecting incumbency and continuity of representation (i.e. preserving of cores of prior districts).

Another factor in favor of appellants … arises from the LRC premising so much of its argument upon the notion that preservation of the cores of prior districts, and protecting incumbents and the current political makeup of the General Assembly, are concerns requiring constitutional accommodation in the formulation of a new map. As we have noted [see pages 44-47], such political concerns may indeed be pursued and considered, so long as their accommodation does not cause a demonstrated violation of Section 16 factors, factors which are politically neutral. (page 53)

And it is some consolation that through the efforts of this case, at least some people were spared or at least experienced partial relief from excessive splits.

The following maps illustrate where the improvements were made and where the problems remained. 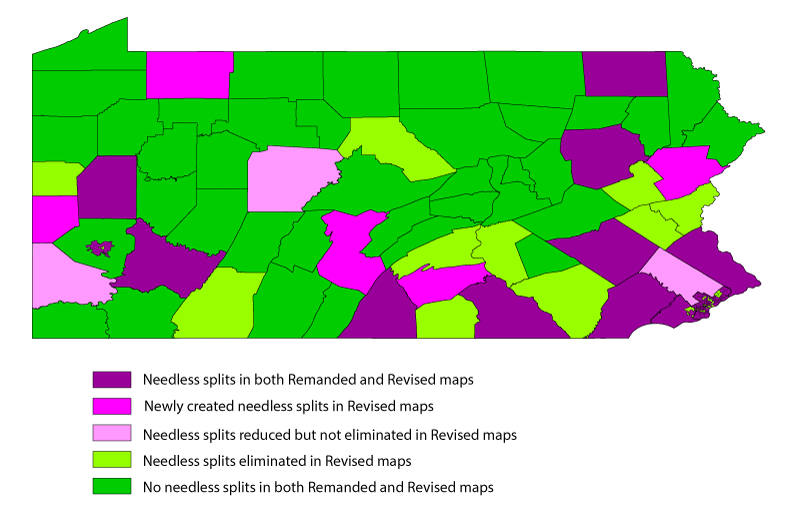 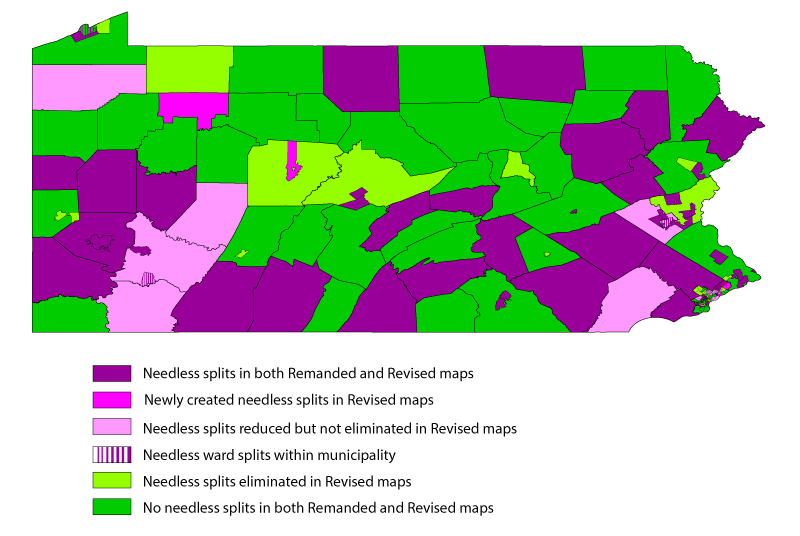 When compared with population density maps, it is obvious that where people are most plentiful are the same places where needless splits remained.

This case would have gone nowhere without two law firms seeing a grievance with a fighting chance. Those firms are Hogan Lovells and the Public Interest Law Center of Philadelphia. They jumped in when most people I spoke with told me that this was a hopeless business and an exercise in futility. Through their efforts, a compelling case was made not just once, but twice.

I especially would like to take a moment to publicly thank the many lawyers who helped with the case: Virginia Gibson for her outstanding work speaking on behalf of myself and the other petitioners as well as David Newmann, Michael Churchill, Stephen Loney, and many others behind the scenes. Their tireless efforts did not go unnoticed.

Also, it would be remiss of me to not thank those who offered moral support in this long endeavor as well as those who had the courage to speak up regarding their grievances under the new redistricting plan. Each voice makes a difference.

The End to be Continued

We will not be appealing the decision, so the case ends here. But my review of the decision will continue tomorrow with some of the more puzzling and perplexing aspects of the opinion.