At first, it seemed like an impossible task. But then with fresh inspiration from hearing that others believed it was really possible, I tackled the region yet again and this time found success.

Of course, it came at a small cost to political subdivisions. The Step 3 results only had one ward split, all 5 house districts contained within the city limits, and the townships (for the most part) whole. 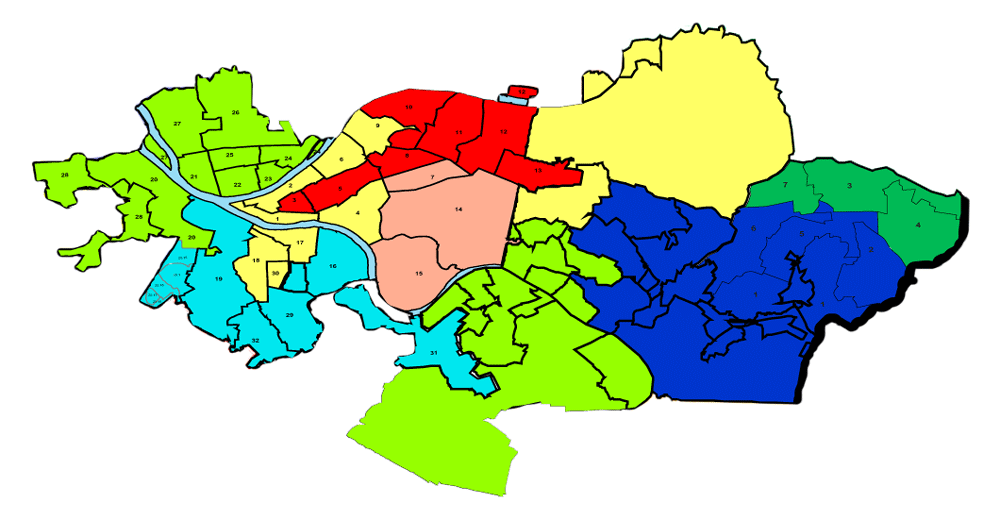 It shows the City of Pittsburgh and few of the townships located East of the City. The minority district is colored red. Once Step 4 was complete, the results were not quite as neat and tidy.

Still, the impact was minimal. Only two city districts now were shared with the neighboring townships and only one additional township was split. The minority districts are red and yellow (the northwest one). In each, the black minority population represents 54% of the district (and 50% of the over 18 population).

Some of the shapes are a little funny, but are justified by either forming a minority district or keeping political subdivisions whole. Based on other minority districts in other states, this would be considered compact.

Here are side-by-side comparisons of Step 3 and 4.

And there you have it: two minority-majority districts in Pittsburgh, Allegheny County with minimal impact to political subdivisions — just like the PA Constitution requires.

While not known when creating these maps, they also address the concerns raised by citizens testifying at the Pittsburgh Public Hearing.

This is a small proof of how the proposed system brings together the requirements of the law and the needs of the people. The old methods resulted in numerous problems for communities, as the testifiers pointed out. The Holt Proposal creates common sense maps leaves the people the winners.