To really understand the redistricting process, one must begin by understanding the ground rules. The following rules apply specifically to Pennsylvania, but may also be true in other states.

For those interested in the short answer, there are 5 basic rules.

For those interested in the rest of the story, keep reading.

The Courts, through their judicial rulings, have encouraged States to prioritize rules from their State Constitution first and then meet the Federal ones. The Courts have also defined some ambiguous terms used in Redistricting Rules (like “as equal in population as practicable”).

The Court has defined “Equal Population” to allow for up to a 10% in order to preserve political subdivisions. This leeway is to be only used for this purpose and no other, as the Court also recently made clear when one state attempted to use the variant to intentionally adjust the political presence of a party within a district. That was a big no-no.

Still, despite this reminder, 33 out of the 50 states used an over 9% variant for one or both of their State chambers. At least 3 of those 33 had their variant challenged in higher court. All 3 were allowed to keep the high variant, the challenge was not upheld.

The other three rules lack strong court definitions. For instance, on the one hand the Court says that contiguous means the ability to go to all points of a district without leaving its boundaries. On the other hand, they approve maps where districts are technically non-contiguous because they include political subdivisions that are themselves non-contiguous. Lancaster Township is probably the best (or is it worst?) example of this.

Anyone looking at previously approved maps will wonder at how some districts met the compact requirement. They may also wonder at the number of divided political subdivisions found to be “absolutely necessary”.

In 1965, congress passed a new law called the Voting Rights Act. It basically forbid states from discriminating against minorities and placed several states (who had a history of trouble in this area) on probation. Some of these states are still on probation today and must meet some extra requirements. Pennsylvania is not one of them.

Districts that meet this requirement are called Minority-Majority Districts because they give the minority population a majority presence in the district.

As time has passed, the Courts have established a measurable way to determine when a State is required to form a minority majority district. Their three-way test basically comes down to this standard: The minority  is compact enough to compose 50% + 1 of the over 18 population in a district.

Much debate also exists regarding how much consideration should be given to creating minority-majority districts. On the one hand, some interpret the Court decisions  to mean that race is permitted to be a primary factor in forming districts. Others argue that race should not be considered at all in making districts and certainly not a primary or first consideration.

What is not debated is that how States interpret these rules will continue to come under careful court scrutiny and regulation.

It should also be noted that these rules apply to State Redistricting. The Federal redistricting must, of course, meet the federal rules. But there is no specific state rules.

And unlike the generous Court definition of equal in state districts, the federal districts viewed through a much narrower and stricter lens. The National Committee of State Legislatures released a table showing population equality of the 2000s districts that illustrates  this point. Only 10 out of the possible 43 states were permitted any variation. The remaining 33 states had a 0% overall range with a typical 1-6 person difference. 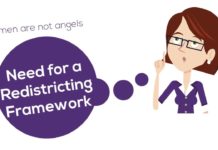